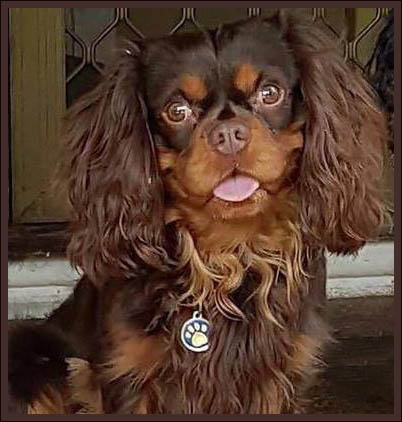 Beginning in 2021 Royal Flush Cavaliers added the rare Chocolate gene to our renowned and innovative breeding program.  Coco, our first girl, will be bred in the years to come as we hold back our own lines and work to acquire complimentary male lines from other established breeders and color specialists to enhance, develop and perfect our program.

Coco is shown below: 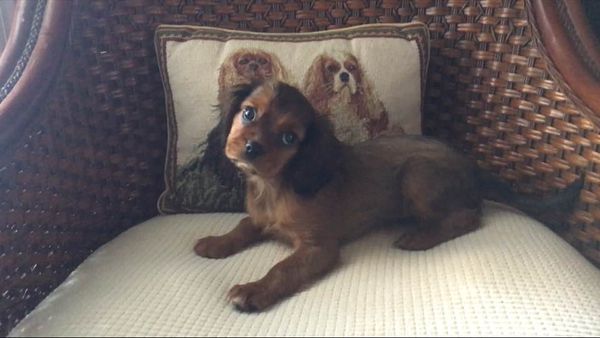 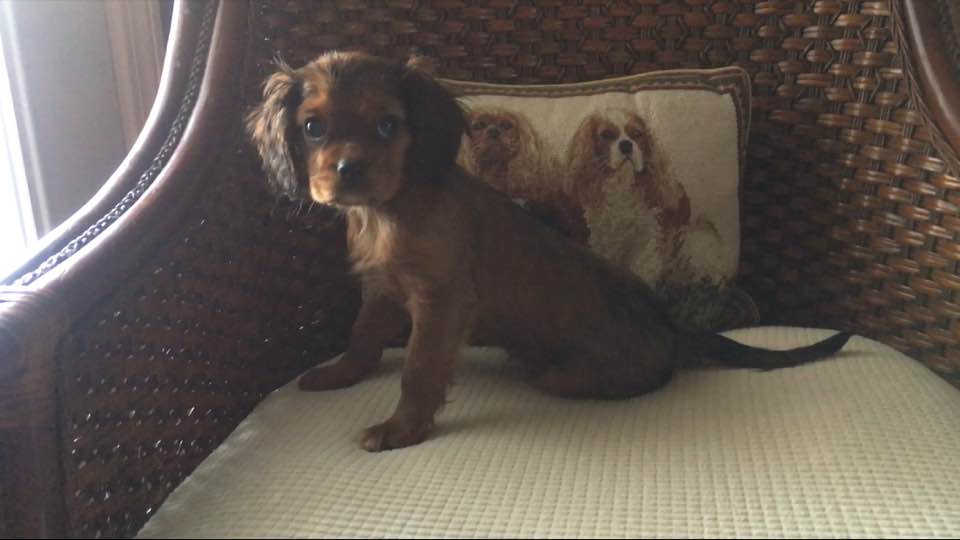 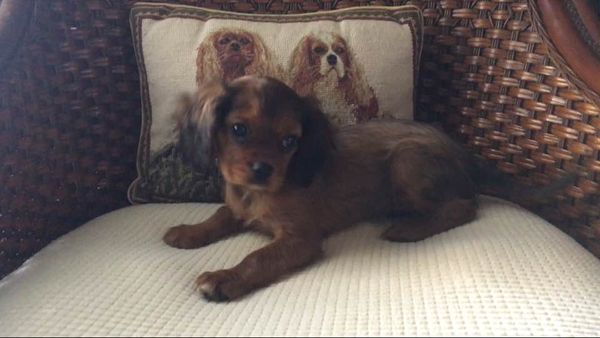 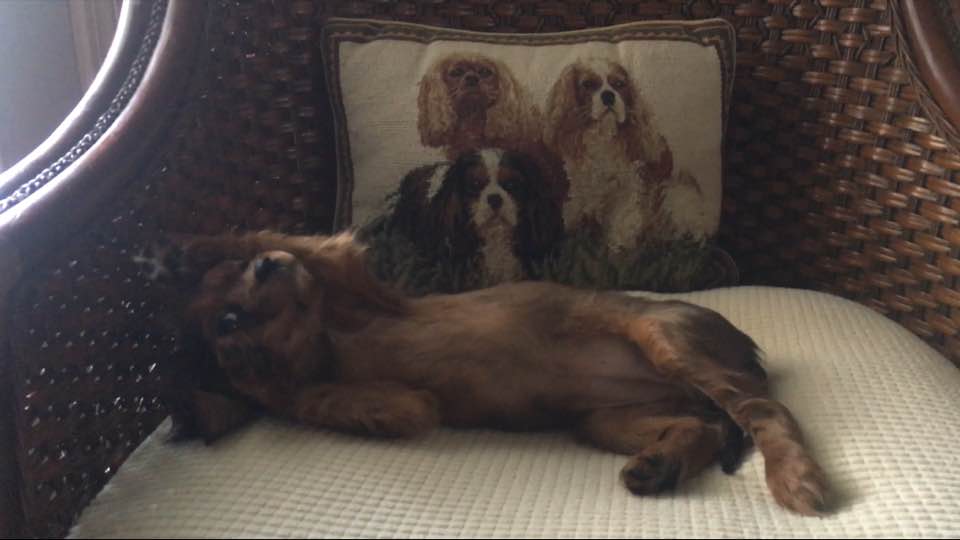 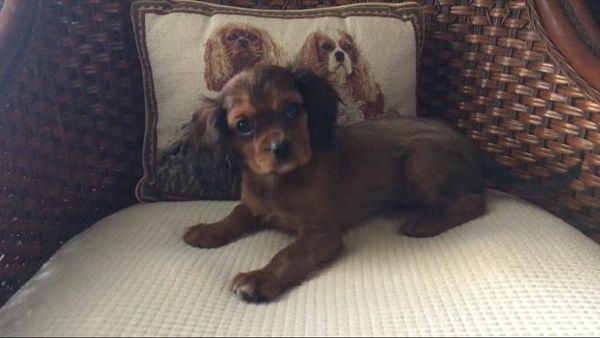 In the Cavalier world locating the extremely rare Chocolate gene has been near mission impossible. According to researchers there are only two known originating Chocolate Cavalier Kings Charlie Spaniel bloodlines in the world, making the coloring extremely rare.  Chocolate Cavaliers carry the recessive b locus (brown) gene and thankfully with modern science there is a B locus DNA test to determine if your Cav carries the recessive Bb or bb gene.

The Chocolate gene expresses itself as a Chocolate Tan, Chocolate Tri, Chocolate Ruby and Chocolate Blenheim.  In both the Chocolate Ruby and Chocolate Blenheim you can visually see the brown foot pads, eye rims and nose.  The eye color is also diluted.  The b variant affects only eumelanin pigmented areas (black) and not phaeomelanin (red) pigmented areas.
All colors can be AKC registered but not all colors can be shown. "Prior to 1973, “All colors were recognized”. It was only in 1973 that the Breed Standard was changed to disallow for showing the whole color Blacks, Black & Whites, and Chocolates. The Chocolate gene expresses itself as Chocolate Tan or Chocolate Tri. Chocolates were also registered with the CKCSC, USA before the AKC officially recognized the Cavalier in 1995.
- Cochran Cavaliers
THERE ARE 12 COLORS THAT A PUREBRED CAVALIER CAN BE REGISTERED AS WITH THE AKC:

SOLID WHITE IS NOT A COLOR - IT IS A FORM OF ALBINISM AND CAN RESULT IN BLINDNESS, DEAFNESS OR DEATH
BLUE EYED CAVALIERS - BLUE EYES ARE A RESULT OF THE MERLE GENE.
Merles or blue eyed Cavaliers are produced when a dog has a single copy of the M< allele. All merle dogs have the genotype Mm — meaning they have one allele for merle and one allele for non-merle. All non-merles are mm. If you breed a merle (Mm) to a non-merle (mm) you will on average produce a litter in which a half of the puppies get the M allele so are Mm (merle) and half get the non-merle allele so are mm.  But if you breed two merles together (Mm X Mm) you will produce on average a quarter mm (non-merle), a half Mm (merle) and a quarter MM (double-merle; also called double-dapple).
You want to avoid producing MM dogs because they are often white and have a high incidence of visual and auditory problems. 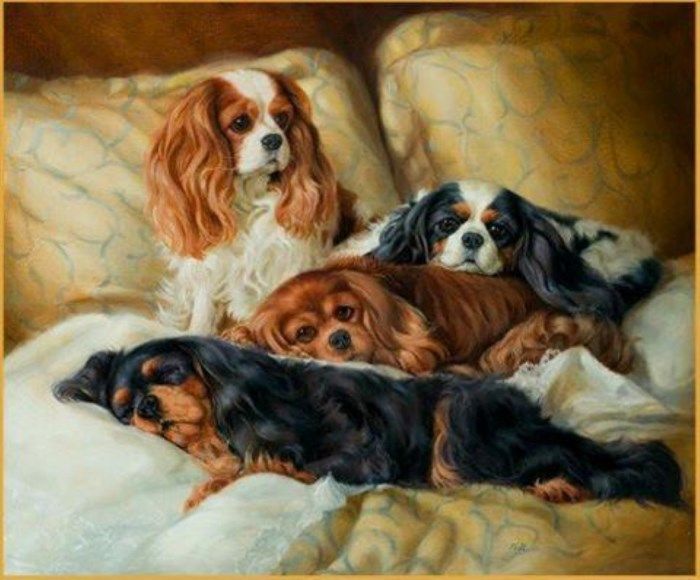 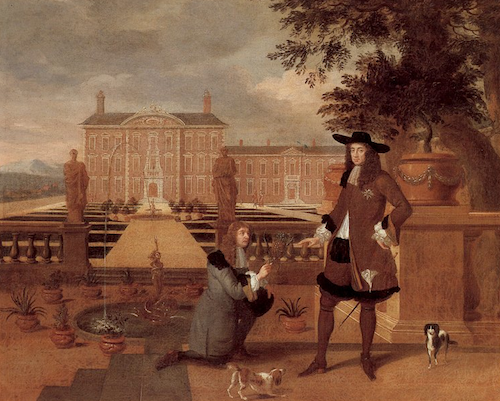 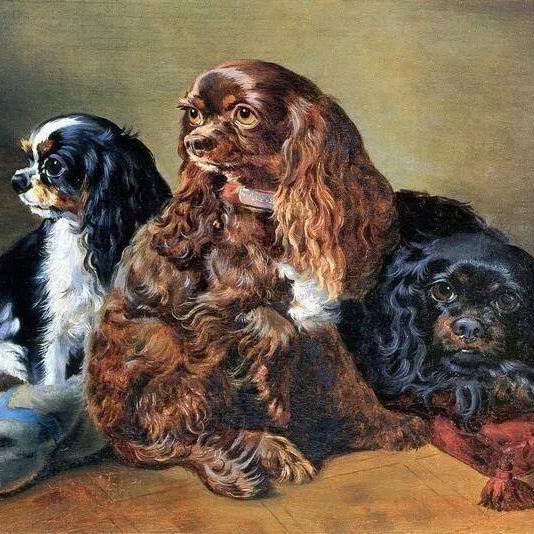 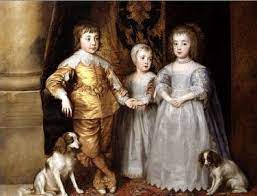 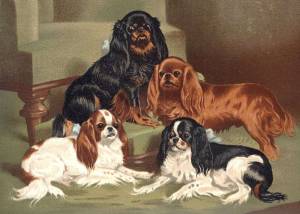 Toy spaniels were the province of European nobility from at least Renaissance times. Two 17th-century British monarchs, the ill-fated King Charles I and his son Charles II, were especially devoted to a black and tan variety of toy spaniel that eventually was named in the latter’s honor. According to the famed diarist of the Restoration era, Samuel Pepys, Charles II seemed more concerned with breeding spaniels than ruling Britain.  Toy spaniels remained a great favorite of British aristocrats into the early 19th century. Among their upper-crust partisans of this era was the Marlborough family, who bred a line of red-and-whites at Blenheim Palace. Later in the century, in the age of Victoria, the breed was crossed with Asian toys, probably Pugs and Japanese Chin, and became what is known in America as the English Toy Spaniel (or, in the UK, the King Charles Spaniel).
This new-style toy spaniel had a domed skull and a flatter face than those of Charles’s time. Before long, this type dominated, and the traditional toy spaniel was rendered nearly extinct—but not forgotten.

Fanciers of the 1920s wondered whether there still existed the old-type toy spaniel immortalized in ancestor portraits hanging in the stately halls of English manors. A wealthy American named Roswell Eldridge offered a cash prize to British breeders who could produce “Bleinheim Spaniels of the Old World type.” The prospect of prize money drove breeders to revive the old style. These dogs were dubbed Cavalier King Charles Spaniels. (The name Cavalier is a nod to the monarchist party that supported the Stuarts during the civil war that cost Charles I his head.)

Though there are many colors and patterns within the breed, they are notable for four distinct color patterns, each of which, at various times, was associated with a particular noble family: Blenheim (chestnut markings on a white background), Tricolor (black markings on a white background), Black and Tan (black with tan markings), and Ruby (a rich red).
- Courtesy AKC.org

Royal Flush Cavaliers * Copyright 1990-2021 * All Rights Reserved - We are NOT affiliated with Royal Flush Havanese, Holly Anderson or any other Royal Flush enterprise.